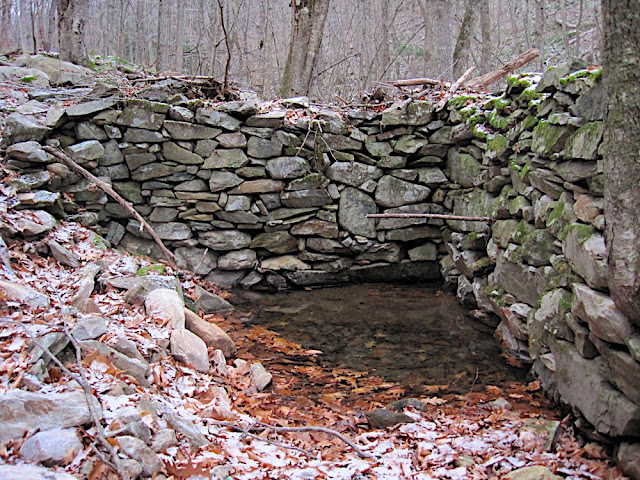 There are several numbered 'cellar holes' that exist in Dogtown; these markers represent the former homes of Dogtown; once a vibrant area settlement in Gloucester but now somewhat of a beautiful ghost town. Dogtown is a historic part of the City's past and brings people from around the globe to visit. Only a handful of homes remained in the early 1800's; some of the cellar holes of these homes can be seen today.

1. Anthony Day married Mary Davis and the two had seventeen children. One son, Isaac, was a gunner on the United States Ship (USS) constitution. All children also bore many offspring.

2. Becky Rich was a woman who told fortunes from coffee grinds. She was a nice old lady and mainly made her business in young people. She would tell teenagers who they were or weren't to marry, among other relationship-related business.

14. Hannah Stevens' father was Joseph Stevens. Joseph Stevens owned a large amount of land and in spite of his wealth was still a nice person.

15. Easter Carter was very well known around Gloucester. She could often be found dressed as a man, under the pseudonym John Woodman. With this persona, Carter did a lot of outdoor work, primarily in building stone walls.

17. Dorcas Foster was seen as a very brave girl, as she was independent at a young age. Her father was not around very much. She married three times. Her last marriage was to Captain Joseph Smith, who commanded a brigantine in the War of 1812.

18. Isaac Dade led a very eventful life. After serving aboard an English man-of-war during the Revolutionary War, Dade became impressed by the area and deserted the British Army. He sailed to Virginia on a cargo ship and joined the Continental Army. He rowed across the Delaware River with George Washington. After fighting in many major battles, he became badly wounded and later left the Army to marry Fanny Brundel. Dade was well acquainted with the George Washington family. With his health deteriorating, he resolved to move back to Gloucester. It was here in Dogtown that he built a house, now known by its cellar hole, Cellar Hole 18.

19. Molly Jacobs was a friend of Judy Rhines and Liz Tucker. These three are known for bringing infamy to Dogtown in later years, as it began to be viewed as the "red light district" of Gloucester.

22. Joseph Riggs's father was Sam Riggs. Sam Riggs owned a sizeable amount of land and was town clerk and schoolmaster in 1661.

23. Pearce's large sheep flock attracted the attention of British raiders during the War of 1812.

24. Abram Wharf was a very successful sheep farmer. In 1814, all his children had left him. This prompted him to crawl under a large boulder and ultimately commit suicide. This came as a shock to many people as he was very smart and had many friends.

25. Peter Lurvey was married to a sister of Abram Wharf. He is well known for his leadership during Captain Lindsay's attack on Gloucester. Lindsay planned to attack the Commons and take the sheep for food. The skirmish resulted in a few cannonballs causing damage in Gloucester. The militia lured the Falcon to a cargo ship which looked deceptively loaded. When in range, the men fired on the Falcon, driving it out of the harbor. Before it left, it killed two men, one being Lurvey. He was the first Dogtown man to be killed in war.

27. The builder of the structure known as the Castle is unknown. Becky Rich's daughter Rachel Smith is believed to have lived there. Aunt Rachel, as Rachel Smith was known, was famous for brewing herbs and making medicines

Judy Rhines and Tammy Younger are known as the "witches of Dogtown" for their power to control people and manipulate situations in their favor. While this may have led them to achieve the title of "witch," these characteristics are also apparent in many politicians.

The sheep of the commons were subject to stealing. During the War of 1812, British sailors would see them as prizes of war and steal them from their owners in Dogtown.